ANPA Board of Directors

The Alaska Native Professional Association (ANPA) is operated by elected or appointed members. Together the Board of Directors oversee the activities of the Association to ensure ANPA is operating to meet its core purpose, "Develop young Alaska Native Leaders."

﻿ANPA encourages members to provide feedback to the Association by speaking to any member of the Board. Joshua Vo, Chair
Joshua was born and raised primarily in Anchorage, but his family is from Saint Mary's, Alaska. He graduated from the University of Alaska Anchorage in May 2016 with his Bachelors in Business Administration. Joshua is currently employed at Koniag's federal contracting subsidiary Kadiak, LLC as the General Manager.  Joshua currently serves as a commissioner on the Anchorage Equal Rights Commission and an Emerging Leader with the Inuit Circumpolar Council - Alaska. He is also a former Fellow in First Alaskans Institute’s First Nations Futures Program. Prior to Koniag, Joshua has had experience with a variety of organizations including other Native Corporations, Tribal Health entities and a US Senator’s Office.​

Karli Brakes, Vice-Chair
I am a life-long Alaskan, born and raised in Juneau, AK. I am Tlingit and a Sealaska and Sheatika shareholder, as well as a Central Council Tlingit & Haida Tribal member. My community has always been an important part of my life. I worked for CCT&H Business and Economic Development Department for several years. Directly working with local native business owners and artists, I knew that bringing Alaskan’s together would always be something I would strive for. ​I now work at Pebble Limited Partnership as the Public Outreach Coordinator, and I am dedicated and driven to better the Alaska I already admire.

Selma Khan, Treasurer
Selma is a lifelong Alaskan born and raised from Barrow, Alaska. She is Inupiaq and Pakistani. She graduated from the University of Alaska Anchorage with a Bachelors of Arts degree in Anthropology. Just recently Selma completed a Masters of Business Administration degree from Wayland Baptist University.  She is currently looking at pursuing a doctorate degree program in Organizational Development. Selma is a shareholder of the Arctic Slope Regional Corporation (ASRC) and Ukpeagvik Inupiat Corporation (UIC). She currently works for UIC as a Corporate and Commercial Senior HR Manager and is a point of contact for shareholders for the shareholder development program within UIC.
​ 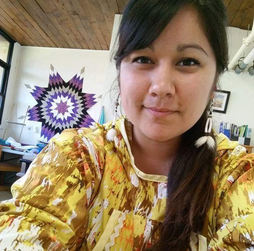 ​Shannon Hawkins, Secretary​
Inupiaqnurunmi Aayaduk, I’m Shannon Hawkins, Inupiaq; born and raised in Anchorage, Alaska but family is from Nome, Wales, and Little Diomede. After attending an ANPA mingle, I realized how valuable this organization is by allowing young professionals to develop and improve their leadership skills. I look forward to growing with this organization and making a better impact with our Alaskan Native community. In May I graduated from Haskell Indian Nations University with a Bachelor of Science in Business Administration. A few activities someone might see me at are native games events, dance festivals, and language circles.

David Clark, Director
David was born in Idaho and raised between Anchorage, AK, and Portland, OR, before moving back home permanently in 2003. His mother is from Juneau, Alaska, and his father is from Burley, Idaho. He is of Sugpiaq/Alutiiq, Welsh, and German descent. He participated in Southcentral Foundation’s RAISE Program for a number of years, and he credits that program for a lot of his early personal/professional development in addition to igniting his passion for intergenerational healing, mental health, healthy relationships, and advocacy. He has spent time studying in Washington, D.C., which introduced him to the exciting world of legislative affairs and why involvement in the political process is especially vital to Alaska Native people. He hopes to turn this newfound passion for political involvement into a career, working across governmental and non-profit sectors. He currently works at the Alaska Native Village Corporation Association and volunteers regularly with The Alaska Center and First Alaskans Institute. He also serves on the Board of Directors for Choosing Our Roots, a grassroots organization that works to connect at-risk/homeless LGBTQ-identified youth in Anchorage/Mat-Su Valley with host homes and other resources to help them achieve holistic wellness and better life outcomes

Farrell Stoudt, Director
I am Iñupiaq, Yup’ik, Tsimshian, and Mojave, born and raised in Anchorage, AK. I graduated from the University of Alaska Southeast with my Associates of Applied Science in Health Information Management (HIM) in May 2017. Shortly after, I obtained my Registered Health Information Technician certification. I am currently working on obtaining my Bachelors of Science in HIM, through the University of Cincinnati. I am employed with the Alaska Native Tribal Health Consortium (ANTHC) as a Clinical Applications Specialist. I find it important for our younger generation to have the opportunity to become a leader and give back to their communities, while embracing our culture.

Eric Reimers, Director
​Eric Reimers currently works as a consultant that specializes in working with Alaska Native village corporations to develop strategic plans, conduct feasibility studies, and build shareholder capacity through training. He previously worked as a Policy Coordinator with the Alaska Native Health Board, which is a non-profit that focuses on the health and well-being of Alaska Natives. Additionally, he has worked for Senator Lisa Murkowski (R-AK) as a Legislative Correspondent and Staff Assistant. Previous to that, he earned a B.S. from the University of Alaska-Anchorage (UAA), and also took part in the Native American Political Leadership Program (NAPLP) at George Washington University (GWU). While at GWU, he was a Legislative Intern for the House Committee on Natural Resources. He is originally from Iliamna, Alaska, where he is an enrolled member in the Native Village of Iliamna, as well as a shareholder in Iliamna Natives Limited (INL) and the Bristol Bay Native Corporation (BBNC). He was brought up commercial, subsistence and sports fishing with his parents and grandparents in the Bristol Bay region of Alaska. He earned his private pilots license when he was 19 so he could enjoy exploring Alaska.
​

Brittany Brown, Director
​Of Inupiaq heritage, Brittany Brown was born in Nome, Alaska and raised primarily in the Mat-Su Valley. She graduated from the University of Alaska Anchorage with her Bachelors in Business Administration and soon after with a Masters of Industrial Distribution from Texas A&M University. Brittany is the Co-Founder and Principal Consultant at Akpik Associates where she supports strategy development and execution of corporate strategy and community programs, in addition to supporting a spectrum of other issues in corporate, public and community relations. A Bering Straits and CIRI descendant and Sitnasuak Native Corporation Shareholder, she believes in the importance of supporting our Native peoples by creating opportunities and enabling them for growth both personally and professionally.

Penny Gage, Director
Penny Gage (Tlingit name Xʼwa sée yá) works as an Economic Development Specialist at the University of Alaska Center for Economic Development. She was raised in Pelican and Sitka, Alaska and has a multi-racial background. Her mother is Amelia Kito, who is Tlingit, Japanese, and white, from the Raven L'eeneidi (Dog Salmon) clan. Penny’s father Steve Gage is from Oregon and his family is Northwestern European. Penny is a member of the Sitka Tribe of Alaska and a shareholder of Sealaska Corporation.
​
Penny has a BA from the University of Alaska Fairbanks and served in the U.S. Peace Corps in Nicaragua for two years. She earned a Master of Science in Foreign Service from Georgetown University, with a Certificate in International Business Diplomacy, focusing her studies on energy policy. She has worked in federal and international government affairs at multinational energy companies in DC, in both state and federal government offices, and in the nonprofit sector at two Alaska foundations and at an Arctic policy think tank. She most recently worked for Alaska Growth Capital as the Director of Special Projects, a Community Development Financial Institution and subsidiary of Arctic Slope Regional Corporation. She is active in supporting the Alaska startup community and is passionate about growing Native-owned small businesses. She has co-chaired Alaska Startup Week, helped organize Anchorage Startup Weekend, and has been a lead organizer of Anchorage’s 1 Million Cups weekly entrepreneur pitch meetup. Penny is one of eight certified Indian Country Digital Trainers nationwide through a partnership with Google and the National Congress of American Indians, focusing on improving digital skills in Native communities. She is a volunteer leader of Anchorage’s Returned Peace Corps Volunteers network and a reviewer for admissions to her Master’s program at Georgetown University. Penny sits on the board of the Anchorage Museum and is a member of the Sealaska Corporation Shareholder Participation Committee.
​